Why Modular is the Way Forward

Many Brits will still be basking in Olympic glory, the flurry of gold, silver and bronze a welcome boost for the country. As the citizens of Rio will no doubt attest, organising massive projects like an Olympic games force us to think outside the box on how we deal with having that many people in one city for a fortnight.

Four years ago, when the games were on home turf, Elements Europe delivered 375 bespoke modules to the Ministry of Defence which went on to house more than 3,000 soldiers on the outskirts of London. And in 2013 we sent modules to the Northern Irish police to use during the G8 summit.

But it’s not just the defence industry where modular construction is popular, it’s become the norm in a host of other fields from hotels to healthcare to purpose-built student accommodation – we manufactured 461 Room Pods for a Berkeley Homes student scheme in Bath city centre.

Off-site construction offers a wealth of benefits to our clients, from certainty of delivery, reduced programme time, better energy efficiency and greater design consistency. It’s been widely used for years in North America, the Netherlands and Japan – where modular-led construction means Tokyo can build 140,000 homes a year.

The UK’s residential sector in comparison has been slow to adopt these methods but, with a flood of announcements backing modular this year, that could well be changing. The catalyst for widespread adoption in this country, however, will be the build to rent sector.

The bespoke rental market and offsite construction are a perfect fit. Through off-site, build to rent developers can bring forward homes more quickly, ensure a consistency in design across their scheme or portfolio and reduce operation and maintenance costs – crucial when holding the asset for years.

We’ve recently announced our partnership with Essential Living to design, create and deliver modules to their award-winning Creekside Wharf scheme in Greenwich.

From our factory in Shropshire, we’ll deliver 653 modules to Creekside Wharf, these will stack together on site, forming the steel frame around the building’s concrete core – acting in a similar way to an office block.

Working in a controlled factory environment means we’re not at the mercy of the British weather. And the fact that work can be done on site at the same time, means the programme time in Greenwich is projected to be halved to 32 weeks.

The design and construction work for build to rent is very similar to, and a natural extension of, our previous involvement in the hotel and student accommodation sectors. All three are operating assets – unlike for sale – so anything that can be done to reduce maintenance hassle and cut operational costs will pay dividends to the asset’s long term performance.

Replacing a broken bathroom pod might sound like a minor inconvenience, but lengthy refurbishments can severely diminish returns. So being able to take on this maintenance quickly and easily is paramount. And modular construction helps you get there.

Modular construction and build to rent ideally complement each other. So it’s no wonder industry stalwarts like Essential Living and heavyweights like Legal & General are exploring it for their projects. There’s even talk of the government setting up their own factory or directly commissioning modular housing, which would be a massive step forward for the industry.

British sport has come on leaps and bounds since the last Olympics and, judging by recent announcements, so has support for modular construction. Where it gets to by the time the Tokyo games roll round – who knows. 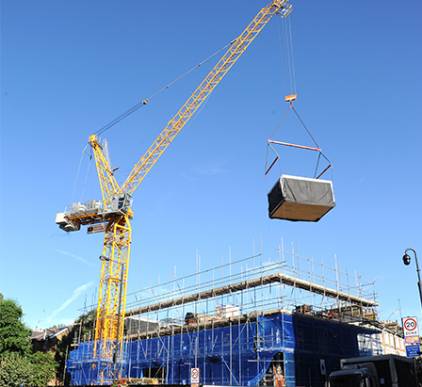