Construction generates almost £90 billion annually (6.7% of GDP) and employs in excess of 2.93 million people, the equivalent of about 10% of UK employment (BIS).

The construction industry saw 140,000 jobs lost in the 2008 recession and struggled through the 2012 dip, however, there is now a new challenge for the industry.

Many construction workers are retiring, and the rate of retirement is only predicted to increase due to 22% of the workforce being over 50, and 15% are in their 60s. The industry is also being perceived as unsteady, losing out to sectors where work is more stable and pay competitive. With an ageing workforce and a poor pipeline of young people entering the industry, the construction industry looks certain to face a skills crisis in the next decade.

A knock-on effect to the industry was identified by a Build UK survey which revealed that 25% of contractors had found themselves unable to bid for work, due to labour shortages.

The Chartered Institute of Building (CIOB) has reported that the industry will need to find 157,000 new recruits by 2021 in order to keep up with demand. One of the key ways in which the industry and the UK government are attempting to tackle this is through the recruitment of apprentices.

The Government’s Apprenticeship Levy has encouraged employers to take on apprentices but the passion for the trade amongst the younger generation has to be there too. CITB data shows that it is perceived to be about ‘being outdoors and getting dirty’ and most suited to ‘young people who do not get into college or university’. The overall appeal of the construction industry as a career option for young people is low, scoring 4.2 out of 10 among 14 to 19 year olds.

The reason for the lack of interest to enter the trade has been largely blamed on the lack of promotion and education of the industry in schools.

If offsite construction is to become the leading method of construction it can be said that the level of resource needed in the UK will be reduced anyway in line with offsite’s efficient procedures as it is a far more streamlined work force. This is a result of the highly controlled environment a factory presents.

Perceptions need to change to ensure that the industry does not suffer these consequences and it needs to be sold into schools at an early age as a valid, highly skilled and innovative career path. 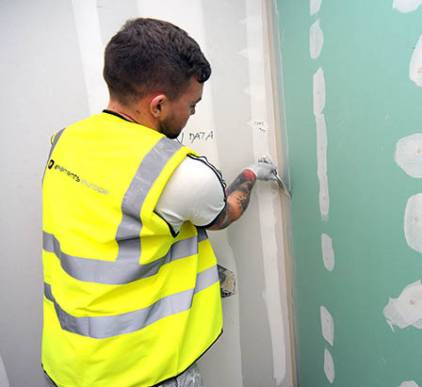