Elements Europe was just one of the 34 contractors that entered a team for the tournament which took place at the Powerleague Venue, overlooked by the iconic Wembley Stadium.  Lee Marley, based in Maidenhead, went on to win the cup by beating Copley Ceramics in a thrilling penalty shootout.

Karl Whiteman, Divisional Managing Director for Berkeley Homes East Thames said, “Each year this popular football tournament enables an enormous amount of money to be raised for Demelza. The specialist type of care they are able to offer really does make a difference to the young children and families who are affected by life-limiting illnesses.

“I would like to thank all of the contractors that supported this day and for everyone who took part in the competition to make it a success.”

Claire Ellis-Waghorn, acting director of voluntary income at Demelza Hospice Care for Children, explained the impact the donation could make “The ongoing support from Berkeley Homes is so important to Demelza, the tournament is organised really well and every team played in the spirit of the game and helped to make the day a great success. This incredible amount of money will allow 40 children to receive a day’s care at one of our hospices.” 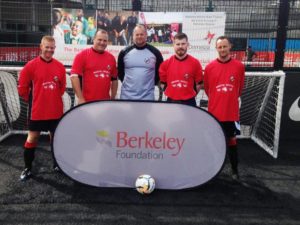